PFCON is a overblown event that is really just a gathering of local Chicago and Midwestern TF fans at someone's residence to gawk and talk about Transformers. If you like transforming toys and love being an idiot for at least a day, PFCON is the place for you! This event will feature drinks, food, Transformers, and even an attendee only exclusive and comic pack-in telling the antics of the Chicagocons!

PFCON is open to the public on Sunday but there are VIP-only pre-registrant events being on Saturday. See the schedule below for details! If you're wondering how to become a VIP Pre-registrant, you probably can't be, sorry!

Location and schedule information are available below.

This is the innaugural year of PFCON and with it comes the first ever PFCON exclusive figure: Lighthouse!

Lighthouse this year's figure and is compatible with all Titan Master toyline toys. This is the first ever live representation of the Chicagocon faction. Limited to a run of 17 (2017!), this one-of-a-kind figure features extensive custom paint apps and even a completely unique molded face! The figure will come in a gift pack including a comic, and other unique items. Gift bags will run $30 cash at the door and are first come, first served! 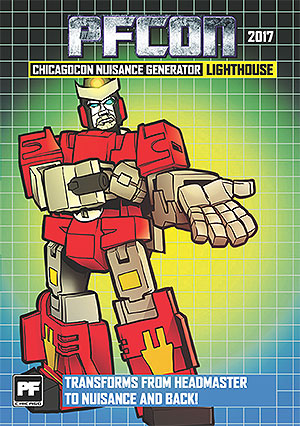 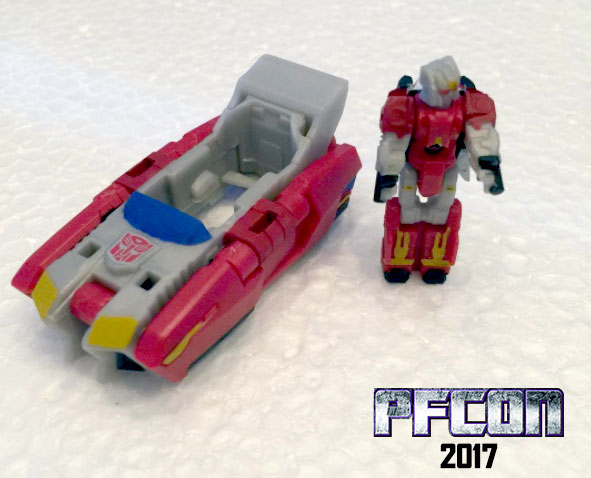 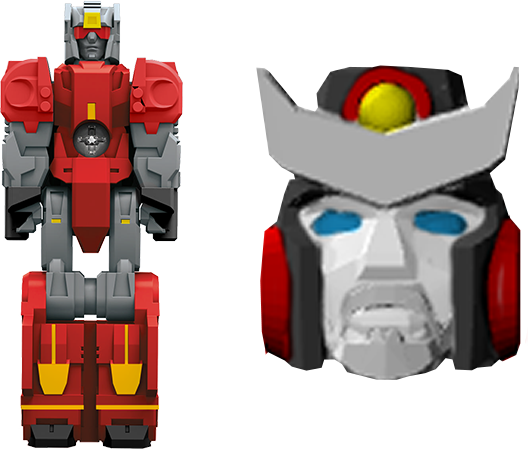 Box art by Nathan Davis. Face sculpt by Trent Troop. Comic panels drawn and written by Robots With Coffee. Bio written by Sergio Garcia.
All other stuff executed by Collecticon.

As a founding member of the Chicagocons, LIGHTHOUSE has been on the team for eons, and has since then earned the trust of commander SCROTIMUS MAGNUS. Sometimes described as “contrary” and “annoying”, LIGHTHOUSE’s ability to whine at supersonic levels can be heard as far as 5km away. Equipped with an ultra-bright search light on his forehead, he is sure to make his presence known wherever he goes. LIGHTHOUSE is known to throw snarky comments during missions and has even driven prisoners into self-stasis lock. Although LIGHTHOUSE can drive his fellow CHICAGOCON to near insanity, his position in the group is irreplaceable and he is considered a vital member of the team.

Weapons / Abilities: His vehicle of choice is a transforming weaponized Zamboni that he modified while scavenging the alleys on the west side of Chicago. It packs heat-seeking missiles and dual shock-cannons leaving even most adamant of opponents begging for the end.

Weaknesses: While the Zamboni is an intimidating sight to behold, it lacks the speed of even a sloth. Tactical escape is rarely an achievement that Lighthouse can boast about, especially with his penchant for commenting on literally everything. As a titan-master, his small stature means other members of the Chicagocons often disregard him.

It is the year 2025. Autobots and Decepticons continue to wage war, but many disillusioned bots have deserted and taken refuge in the shadows of Earth’s great cities. Near the largest of the Great Lakes, a new faction of Cybertronians have emerged in the wake of the Battle of Chicago. The CHICAGOCONS are a ragtag group of bastardbots that have banded together to fight the even more decrepit SCALPERBOTS. Composed of Instigator DIABLEN, Goalie DOJATRON, Driver BOOST, Creator P-3, Politician GRANT MAXIMUS, Accountant PHILSWITCH, Saboteur DECEPTIGAR, Hustler PIMPATRON, Poser HIGATRON, Mechanic SANNY, Treasure Hunter FREEZAH, Architect AUTOMASTER, Brute SURGE, and Nuisance Generator LIGHTHOUSE. The Chicagocons lead by Autobot Elite Guard dropout, SCROTIMUS MAGNUS, whom has barely been able to keep the group from damaging each other over who gets the energon scraps.

The group has gathered together after just learning that their commander “Smagmus” as they like to call him behind his back, has been captured by the Scalperbots. A ransom note written with his innermost energon was left at the place where Scrotimus was last seen. “We’ve taken the your leader Scrotimus and we’ll be taking a bolt off of him every hour on the hour. We will exchange him for the head of Lighthouse. You have 24 hours! –Signed, The Scalperbots.” One by one, each Chicagocon reads the note, last of which is Lighthouse. He gulps as he looks up to see each of his other team members staring him down… 24 hours… that’s all they’ve got!

Want to know more about the Chicagocons and what awaits them? Visit PFcon Sunday July 23rd to meet the real life Chicagocons!

PFCON 2017 will be held in Humboldt Park Chicago. It is accessible from the North Avenue Bus. There is free street parking but no spots are guaranteed! If you'd like to know the official location, please send a tweet to @PFconchicago with hashtag #pfcon2017. We will be happy to give you the location, but since it is a private residence, we will not be posting the address online.

NEWS!!!Revolution Brewery Keg of Anti-Hero will be on location! Please allow $10 for a cup, or bring alternative adult beveragesf or your own consumption.

Saturday lunch will be an offsite taco and mexican food lunch. Cash is preferred at this fine establishment!
Saturday's VIP Attendee BBQ Dinner will include smoked pork butt to be shredded into sandwiches. Roasted vegetables and potatoes will also be available. This dinner is included with VIP attendance! Feel free to bring your own dishes to pass or snacks. Additional accoutrements will be provided such as chips, cheese, and possibly even some Skittles.

Sunday Breakfaster of champioins includes eggs, bacon, and mushrooms. No complaining about the quality of the food will be permitted.

Sunday food options will include grilled hot dogs, burgers, and grilled vegetables again. Feel free to bring anything you'd like to cook on the grill.

Well, there's not too mcuh to show yet so for now, you can check out last year's version of the site for a nice trip down memory lane. It'll be short though, promise!

You likely have a lot of questions about what is actually going on here. If you wish, you may contact us below!